It is very hard not to smile when looking at the foxy head of a Pembroke Welsh Corgi, and Cooper and Pie definitely create smiles wherever they go. Originally from Pembrokeshire, Wales, the Corgi was originally bred to herd sheep and cattle by nipping at their heels. Their short legs helped keep them out of harms way in the event of kicks from the herd. Fortunately for Cooper and Pie they are not at risk for hard hooves to the noggin, as they are the beloved pets and family members of their human family in Rancho Santa Margarita, California, where their job is to keep their humans company.  “Its been fun having two fluffy Corgis running around,” says their Furr mother Carolyn.

Cooper, whose full name is Crysmont Cooper of Countrymen, is a six-year-old male Tri-Color Pembroke Welsh Corgi. His family brought him home when he was just a little sixteen-week-old pup. Known as “Colonel Fuzzy Butt” to his family, Cooper himself prefers “TripleC” for his social media accounts like Instagram.  Named after his human father’s love of Mini Cooper cars, his human mother Carolyn says, “Going through the selection of puppy names was sort of similar to how we go through selecting our kids’ names,” she recalls, “Interestingly we named him Cooper and shortly after the Mini Cooper Countrymen came out.”

Highgrove Apricot Crumble, who goes by Pie, joined the family when she was 18 months old earlier this summer. Originally she was going to stay with her breeder and get to be a show dog, but because she carried a gene genetic disorder that could be passed onto any puppies if she was bred, she was spayed and her breeder decided Pie should have a forever home as a pet. Also known as Pie-Pie, she is a red and white female Pembroke Welsh Corgi. A few accidents in her early days at the house earned her the affectionate nickname “Piddle Pie” but those days are in the past and she’s been living accident free in her forever home.  Pie was named by her breeders and Carolyn and her family decided to keep her name for fear that a name change would confuse her.

Pie and Cooper became Canine Caviar dogs a few months ago after Pie developed a bladder stone. Carolyn did not want to put them on a prescription diet because she was so young and because she did not like the ingredients of the prescription diet. Fortunately Pie’s breeders had recently discovered Canine Caviar holistic pet food and switched over to it for all of their Corgis and recommended it for Pie’s bladder issues. After doing additional research on Canine Caviar dog food Carolyn decided to also feed it to Cooper. “We felt Cooper would also benefit from this organic dog food because he had also been experiencing odd hair loss around his neck, chest and hind legs and what appeared to be an allergic reaction on his skin,” Carolyn recalled, “For a dog who once had such a lustrous, thick double coat, we were also interested in finding a well-balanced food for him.”

“Our goal is that this food will help Pie combat any UTIs which lead to bladder stones, and that it will also help maintain her lustrous, beautiful, soft red fur,” adding, “We realized that it will take a little more time until we see the full results but we are already excited to see that Cooper’s skin is less pink than it was, his fur looks shinier, softer and the lustrous look is slowly returning.”  Cooper’s family is hoping that his trademark “fluffy butt” will return as well as the fullness of his double coat around his neck and chest. They also report that his digestion is more “regular” and he seems more upbeat, and that Pie’s urinary analysis recently came back normal.

Corgis are full sized dogs with short legs, but that doesn’t mean they are not high energy and athletic dogs. Corgis need plenty of exercise and life with their human family definitely provides them with a lot of opportunity to get outside. “As a family we partake in long walks up and down the coast, either Laguna Beach or in Dana Point, every weekend,” Carolyn told us, “We walk our dogs daily otherwise and our favorite activities indoors together are tossing the tennis ball, Hide-n-seek, playing with their toy squirrel and brushing up on tricks.”

Although Corgis are originally herding dogs who herded by nipping at the heels of livestock, neither Pie nor Cooper nips their humans. Sometimes when Cooper’s human brother runs around the house, particularly with food in his hand, Cooper’s brain tells him to chase him to steal the toast and herd him into one spot. He will also corral groups of kids during chaotic social events like parties, but never by nipping, always using other herding techniques that have been woken instinctively in some remote part of his mind. “When he was younger, at dog parks, Cooper would show his herding instinct,” Carolyn recalls, “He was a fast runner and would intercept other dogs to ‘catch’ them or he would run super fast in a big circle and down low to the ground to escape them.” Corgis are extremely fast and agile dogs and it is believed by some that their short legs give them an increased ability to turn and change direction quickly. Pie does not nip or herd; when she is excited she likes to poke her humans with her nose, something she made up all on her own. 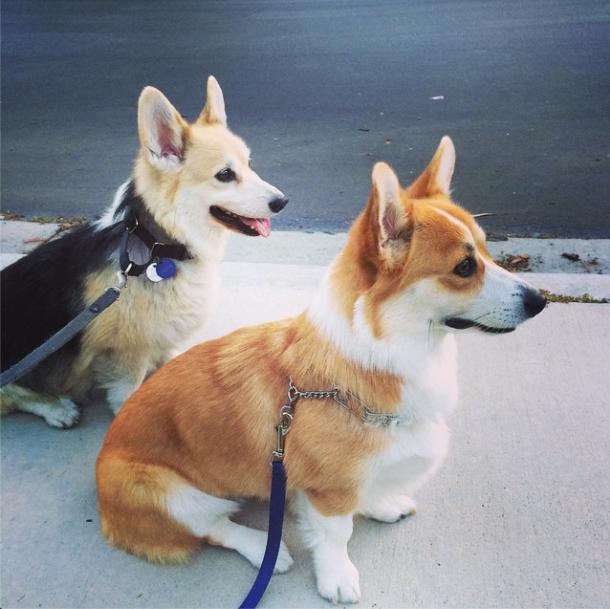 Cooper loves to play fetch indoors but for some reason that the family can’t explain he has little interest in playing fetch outdoors. Since Cooper came to them as a puppy he went to Obedience Training and knows sit-stay, leave-it, down, roll over, speak, shake and can catch a tennis ball. He also knows dance-dance, during which he stands on his hind legs with is front paws up in the air and bang, in which he rolls on his back and puts his paws up in the air in a dramatic display of pretending to be dead. Pie is starting to learn sit-stay and the shake command.

Cooper loves his yellow tennis balls, particularly those with squeakers, and loves playing tug-o-war with his rope toys. “He gets soooooo excited with his vibrating Bumble Ball,” says Carolyn.  Pie loves her unstuffed squirrel plush toy and as a puppy is still learning which items are hers to chew and which are not. Recently she confused her human Mom’s favorite leather shoes as toys, as well as two pairs of Rainbow sandals. Pie also loves to take her human sibling’s shoes outside to play with, so the family has learned the hard way about leaving shoes around the house when a puppy is in residence. “She has never once dared to touch my husband’s shoes,” Carolyn joked.

As a breed with so much spunk and spirit in a compact body, it’s no wonder that both Pie and Cooper have big personalities. “Cooper has a ritual that he does almost 99.99% of the time after he drinks water,” Carolyn told us, “He will drink water and then he will walk calmly toward the outer edge of the living room rug and kick up his back feet like a bull getting ready to stampede, only the funniest thing is that he will do the ‘moon walk’ in the process.”

Pie has developed a tight bond with Cooper and loves to groom him, licking his ears, face and mouth. “She loves to ‘steal’ your affection and crams her way into your lap,” Carolyn said, “and she ‘talks’ to us in the morning when the alarm goes off; it sounds like an ‘arggh’”.  Pie and Cooper have also teamed up to bark uncontrollably when any of the humans sneeze. Perhaps that is their way of saying “bless you” although cold and flu season must be very loud in their household.

When asked what advice she has for fellow dog owners, Carolyn shared this advice, “The last thing I would like to add is that we want for others to understand that having a dog or two is a real commitment. It is essentially like having extra children around the house to care for, to nurture, to teach, to give attention to and to care for. When Pie or Cooper get sick we worry, similar to how I worry about my son getting ill. Getting a dog is a long term commitment, it is a family affair and one often things that if they get a second dog that it will take care of the older dog’s needs,” she continued, “Not quite! I do have to say they are great companions together and we are grateful for that, but it did take us a while to come across a second dog, as we had to make sure they would be matched accordingly. In getting a second dog, we had to make sure that we were truly committed, and we had to ensure that both dogs were compatible as nobody wants to have an unhappy dog!  We feel that our dogs have a healthy, well-balanced, stable and loving home and although there may be some crazy times, we couldn’t imagine our life without our dogs!  They go with us pretty much everywhere and their Corgi smiles and eccentric features (big ears, big paws, big nose, big butts, short legs and rugged bodies) continue to bring many smiles to us!!”