• This is a single blog caption

If you have looked around the Canine Caviar Holistic Dog Food website you have likely read the story of Moguls the Great Dane, who was so plagued by allergies and skin issues that he endured monthly cortisone shots and other medications. Moguls was the reason that Canine Caviar was formulated in the first place, and there are a whole lot of dogs today who are benefitting from the special holistic dog food that was developed just for him.

Canine Caviar Holistic Dog Food owners and brothers-in-law Jeff Baker and Gary Ward’s friendship goes all the way back to high school where they were lab partners in physics class. After high school graduation Jeff attended college full time and Gary attended college classes in the evening and started working in the construction business. A few years after high school Gary began dating Jeff’s sister Michele who is now Gary’s wife and mother of their three sons.

While Jeff was working on a research team in Germany that was creating a flea medication, his beloved Great Dane Moguls was home in California experiencing terrible skin issues and canine allergies. Halfway around the world, Jeff put his Pharmacology and Nutrition background to use and created a special diet to ease Moguls’ miserable skin condition. According to Gary, Jeff created the recipe and Jeff’s Mom would make the food for their beloved dog back in California with the help of Gary and Michele.

Within four months Moguls’ skin lost its pink aggravated appearance, his fur grew back and his coat glistened. He no longer needed cortisone shots or medications.

In 1996 Jeff came back to the United States following the conclusion of his work on the research team and graduated from Cal State. At the same time Gary was growing weary of the dramatic highs and lows of the construction business. After making the same recipe that Moguls ate and giving it to some of their friends’ dogs with similar issues they had an idea to form a pet food business in which they would deliver the food to the customer’s door.

For the first two years neither Jeff nor Gary took a single penny of payroll. “We just put gas in the vehicles to go to events and deliver food,” Gary said, “When we delivered to a home we went to the houses on both sides to see if they were interested in purchasing our food.”

As the company grew both Jeff and Gary worked seven days a week for the first five years that they were in business. “During the week we were busy making the food, delivering the food and on weekends we were at a show or event trying to sell it,” Gary explained. In fact when his oldest son was born 11 years ago he had to leave his wife’s side at the hospital, go to the office and cut payroll checks, and then go back to the hospital to be there for the delivery of his first-born child.

The company continued to grow and has never experienced a year in which their sales declined from the prior year. It was around 11 years ago that Canine Caviar really started to make a name for themselves. “That’s when we really felt that we were nationwide and we were really onto something here,” recalled Gary.

Several years after Jeff created the first formula for Moguls, his veterinarian suggested a veterinary alternative prescription diet since Moguls was suffering from weight loss and other issues that go along with being a senior age dog. Moguls would not eat the prescription diet and the vet told Jeff that his beloved Great Dane had just a few months left to live in his current frail state. Jeff made some tweaks to the food formulation that he had created and came up with the food now known as Canine Caviar Special Needs Dinner. Once again Moguls flourished on the food and lived another four years to the incredible age of 17

An earlier version of the Canine Caviar logo

According to Jeff, he and Gary receive three calls a week to sell the business to larger companies. And each time, they decline the offers. Selling is not in the future. “It’s not something we entertain, or discuss or talk about,” Jeff said, “What would we do afterwards?” he laughed, “We’ve been doing this for 18 years.” Gary shared similar sentiments explaining that he hasn’t even explored what the offers are; he simply and politely declines any and all offers. 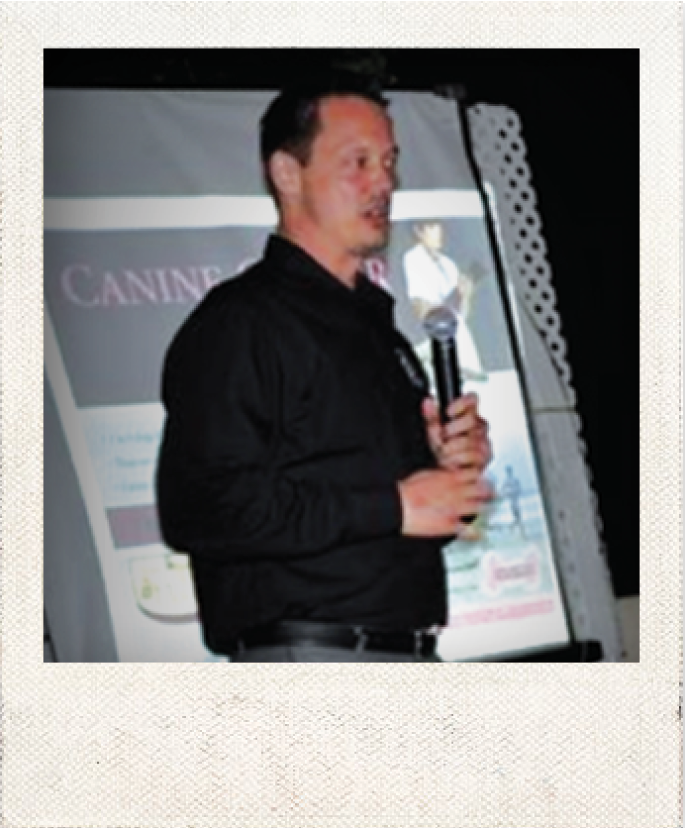 In true family business style, Jeff and Gary remain the backbone of the company that they have created and built. Gary handles the daily operations of the company and is in the office about 95% of the year and Jeff is out of the country 95% of the time, nurturing relationships with distributors and stores overseas. Jeff continues to provide the scientific expertise that goes into the recipes for each formula. He also works tirelessly on owner, pet store and veterinarian education worldwide.

For the first ten years of operation Canine Caviar Holistic Dog Food had four employees. It is only in the last five to seven years that the staff has exceeded ten employees. There is very little turnover and a high level of seniority among the staff with some associates having been part of Canine Caviar for ten years or more. They have also fairly recently added a sales team, a social media team and a business mentor to help them grow.

Canine Caviar products and packaging of years past

Jeff attributes the success of Canine Caviar Holistic Dog Food to having a philosophy, a food that people and dogs both liked, and a following that grew and is still growing organically through word of mouth and honest and heartfelt testimonials from pet owners.

One of the most rewarding parts of being the founder and owner of Canine Caviar Holistic Dog Food are the health results experienced by pets and owners. “Five or six years ago a woman came up to us and said ‘I fed your food when you just started trialing it’ and her dog was 15 years old and still did not have any gray hair. She had only fed Canine Caviar, no treats, no other types of food,” Jeff recalled. He attributes these results with the alkaline PH balanced food that puts more oxygen in the blood and slows the anaerobic activity.

While Jeff currently does not have a pet of his own due to extensive travels, Gary currently has two incredibly lucky rescued German Shepherds. After all, what dog would not love being rescued by the owner of a high quality pet food manufacturing company? “Their hearts break when a bag of treats is accidentally ripped at the warehouse, “he laughed in a warm but sarcastic way, since a ripped bag means the treats will be marked out of stock and taken home to the lucky Shepherds. “My kids think it’s like Christmas to come here to pick out treats for the dogs, “ he continued, “The dogs are truly my kids’ best friends. Last week they built a fort on the back of our property and it wasn’t big enough to fit the dogs so they had to make it again big enough to fit everyone.”

“My entire life I’ve always had a dog, and it’s always been my best friend” Gary said, “I’ve never lived life without a dog.” His current rescue dogs have been the lucky taste testers of the new Canine Caviar grain free Buffalo kibble that will be hitting stores soon. Gary says, “Their favorite flavor is the new Buffalo, they’ve been eating it for about four months, although I do change their formula every bag. When I bring the Buffalo out they are eating it out of the scoop as it’s coming out of the bag” he said, adding with a laugh, “I

Canine Caviar is still working on additional product offerings, including small training treats. They’ve been working feverishly but have not found the right treat formula yet, and Jeff refuses to use chemicals or sacrifice quality simply to fill a niche. Creating new products with their high standards is a process that involves a lot of time to ensure that everything is perfect and worthy of the Canine Caviar name. The company is also working hard on purchasing their own facility for making the food that would be located in California where the office and warehouse operate. Until then, Canine Caviar will continue to produce food in a facility in which they are able to inspect all ingredients when they come into the manufacturing facility and then test and inspect the food again before it leaves the manufacturing facility.